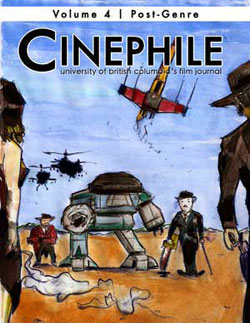 Cinephile is the scholarly film journal published in print and online by the graduate students in Film Studies at the University of British Columbia.  I was the Editor-in-Chief this year, and am immensely proud of the issue our team put together.  The theme we chose was ‘Post-Genre‘:

Genre may be an easy or convenient starting point for analysis and interpretation, but how much does it really matter anymore? Maybe the core film genres have just been around too long; they’ve been maimed and manipulated to such a degree that they no longer resemble their ‘original’ self in any substantial way… We can’t really leave genre behind anymore than we can abandon modernism or industry or structuralism – we’ve just mutated it to the point that it somehow feels new or different. Maybe we should start thinking ‘post’ as less of a temporal marker and more like computational logic. Let’s think of it as an upgrade: Genre 2.0, based on the same fundamental hardware, but with such forward-thinking software that it hardly warrants comparison.