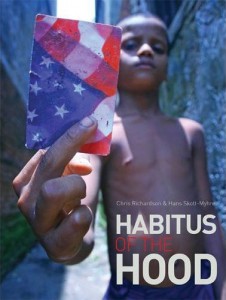 deWaard, Andrew. “The Hood is Where the Heart is: Melodrama, Habitus, and the Hood Film.” Habitus of the Hood. Eds. Chris Richardson and Hans A. Skott-Myhre. Chicago, IL: Intellect Ltd., 2012. Intellect | Worldcat | Amazon | Full text pdf

Abstract: Rarely does such a consistent and self-contained collection of representational material offer itself unto analysis like the short-lived hood film cycle of the early 1990s.  Rarer still, is the foundational structure of such a symbolic collection completely overlooked by its critics. Boyz N the Hood (John Singleton 1991) and Menace II Society (Allen and Albert Hughes 1993) are the hood film cycle’s most renowned and successful films, as well as its most representative. Spike Lee’s classic Do the Right Thing (1989) can be seen as the hood film’s precursor, while Clockers (1995) marks its end by self-consciously examining the genre’s conventions. Over twenty similarly themed films were released between 1991 and 1995 all united, for the most part, by largely African-American creative talent, contemporary urban settings, a strong intermedial connection to youth rap/hip hop culture, and a thematic focus on inner-city social and political issues such as poverty, crime, racism, drugs and violence. All critical considerations of these films in terms of genre and classification miss its fundamental core: the melodramatic mode, centered around the experience of being “another victim of the ghetto.” In Bourdieuian terms, mapping this cycle of films and their hitherto undiscovered melodrama will also reveal that the hood film cycle not only embodies and expresses a particular class habitus – “the internalized form of class condition and of the conditioning it entails” (1984: 101) – but (melo)dramatizes the very production of this habitus, particularly with its primary focus on coming-of-age story lines and a youth audience. The realization of such a melodramatic habitus will unfold in two parts: mapping the melodramatic mode onto a previously unconsidered genre – the hood film cycle of the early 1990s, the melo-ghetto – and then analyzing the significance of what amounts to be the melodrama of the map.  Plotting the melodramatic mode onto such a disparate and seemingly incompatible genre such as the hood film should explicate the geography of the melodramatic mode, showcasing its fundamental characteristics and concerns. Witnessing its application in such a violent and ‘masculine’ genre as the hood film should also prove the versatility of the melodramatic mode. Following this structuralist task, this new melodramatic incarnation will be explored in terms of its evolution of the melodramatic mode, demonstrating the ways in which melodrama is continuously reinvented and redefined. With the hood film, a key shift occurs: the home – a crucial concern in melodrama – becomes the hood, and it requires abandonment.  Intimately connected to this disfigured sense of space is another, often overlooked concern of melodrama: the melos. Music in the hood film, and intermediality more generally, is of central importance in mediating the spatial and temporal logic of the hood. With the hood film, melodrama is put in service of a far more serious concern than its traditional domestic or soap-opera utilization: the socio-political crisis in the African-American urban community.

Book Description: Since the 1990s, popular culture the world over has frequently looked to the ’hood for inspiration, whether in music, film, or television. Habitus of the Hood explores the myriad ways in which the hood has been conceived—both within the lived experiences of its residents and in the many mediated representations found in popular culture. Using a variety of methodologies including autoethnography, textual studies, and critical discourse analysis, contributors analyze and connect these various conceptions.