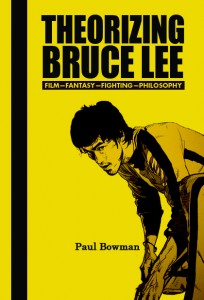 As assistant editor at Rodopi on the Contemporary Cinema series, I play a considerable role in bringing books to press: proof-reading, copy-editing, formatting, print layout, and cover design.  But all the hard work (and delays) are worth it to see the final product in print.  The first release which I have worked upon has just been released: Paul Bowman‘s stellar Theorizing Bruce Lee: Film–Fantasy–Fighting–Philosophy.  It was a pleasure and an honour to be a part of a work of such caliber; highly recommended to anyone interested in Bruce Lee, film studies, and/or philosophy.  Pretty sweet cover too, if I do say so myself (we adapted it from a toy box design).

Bruce Lee is a complex and contradictory figure, and it’s a formidable task to take on the multiple facets of his legacy – fighter, film star, philosopher, nationalist, multiculturalist, innovator.  With an approach as multidisciplinary and iconoclastic as Lee’s approach to martial arts, Bowman provides an original and exhilarating account of Lee as ‘cultural event’.  No one has done a better job of explaining why the martial arts ‘legend’ remains such an important and provocative figure.